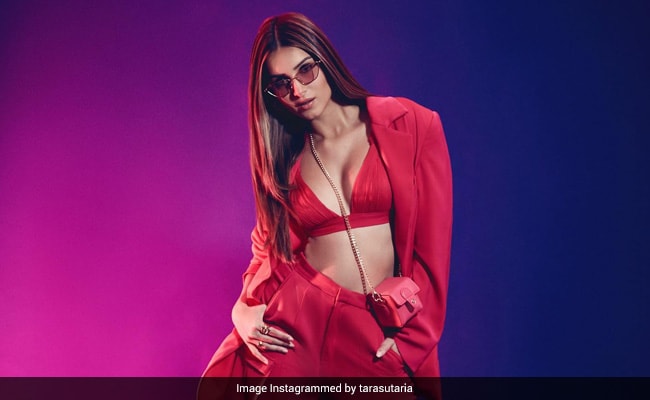 New Delhi: Tara Sutaria, who is busy promoting her upcoming filmHeropanti 2with co-star Tiger Shroff, has shared an alluring post on her Instagram handle. In the post, the actress is looking stunning in a berry red pantsuit paired with a bralette. Keeping her look simple, she accessorised it with gold statement rings and hoop earrings. She completed her look with red-tinted sunglasses, stilettos and a mini bag in a matching red shade. Sharing the post, Tara Sutaria captioned it as, “Ahmedabad #Heropanti2“. Check out below:

Ever since Tara Sutaria started promoting Heropanti 2, she has become the talk of the town. Earlier, she shared a stunning picture of herself on her Instagram handle and captioned it as, “One week to go… #Heropanti2“. For the promotions, the actress wore a pinstriped waistcoat with a plunging neckline and paired it with trousers set.

Meanwhile, on Saturday,  the actress shared the second trailer of Heropanti 2 and captioned it as, “Iss Eid, Heropanti toh banti hai! #Heropanti2Trailer2, out now”.

Talking about Tara Sutaria and Tiger Shroff’s upcoming film Heropanti 2, it is a sequel to the latter’s debut film Heropanti, co-starring Kriti Sanon. Helmed by Ahmed Khan, the film will hit the theatres on April 29. The film also stars Nawazuddin Siddiqui in a pivotal role. A romantic action film is being produced by Sajid Nadiadwala, under the banner of Nadiadwala Grandson Entertainment.