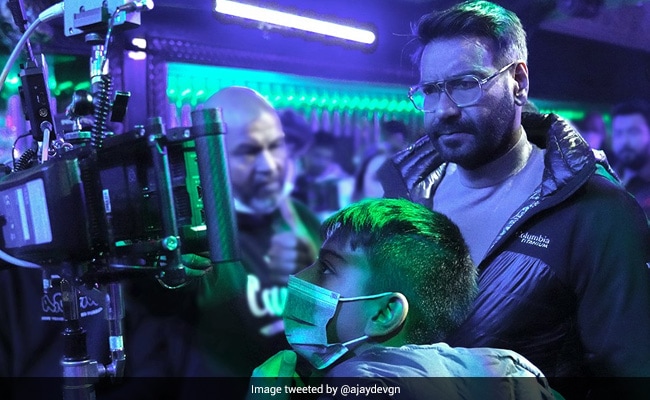 Ajay Devgn’s Father’s Day post is all things special. He has shared a picture with his son Yug from the sets of one of his projects. Here, a curious Yug is peeping from the side to see what’s going on. We can also spot Ajay Devgn who seems to check if the shot is okay or not. Along with the frame, Ajay Devgn wrote, “It’s moments like these that take me back to the days when Papa used to be the one behind the camera as I curiously peeked from the sides. Trying to absorb his love for filmmaking as much as I could.” For those who don’t know, Ajay Devgn’s father late Veeru Devgan was a famous action director.

It’s moments like these that take me back to the days when Papa used to be the one behind the camera as I curiously peeked from the sides. Trying to absorb his love for filmmaking as much as I could.#FathersDaypic.twitter.com/AgotYdgBxg

The same picture was shared by Ajay Devgn on Instagram. And, one of the first reactions came from Tanishaa Mukerji, Kajol’s sister. She wrote, “Happy Father’s Day, Jay.”

On Yug’s birthday last year, Ajay Devgn and the boys jetted off to the Maldives to celebrate the big day. Pictures and videos from the getaway were shared by the actor on Instagram. For the special birthday wish, Ajay Devgn dropped a heartwarming picture of Yug sleeping and wrote, “Happy Birthday, boy. Happy times mean just being around you Yug. Will wait for you to wake up and blow the candles out.”

In another post, Ajay Devgn shared a picture with Yug as the two gear up for water sports. The caption read, “Yug wearing his safety jacket, that’s me, when we hit the waters at the Maldives…

A few of the many defining moments that we had during our short September break.”

Ajay Devgn was last seen in the film Runway34. The film was directed by him. Amitabh Bachchan, Rakul Preet Singh and Boman Irani were also part of the film.