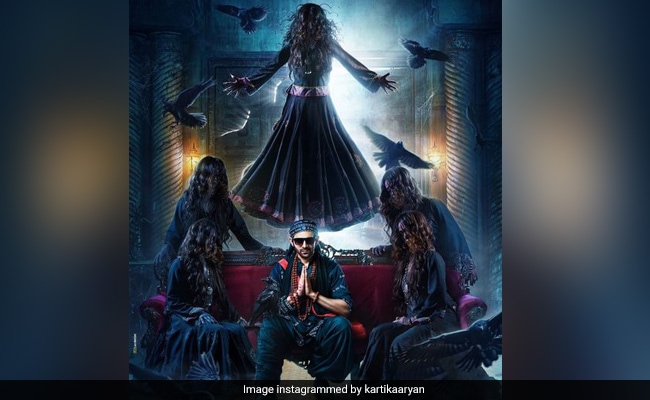 It’s going to be a season of chills and thrills, all thanks to Kartik Aaryan. We are, of course, talking about his upcoming horror filmBhool Bhulaiyaa 2. Kartik, on Saturday, released the new poster of the film in which he is dressed in black robes with Indic script printed on them, a bandana as well as several rudraksha chains around his neck and wrists. While the star does look his usual handsome self, chances are you will be distracted by the bunch of women – looking scary with hair covering their face – standing around him. There is also one woman seen rising above Kartik in the poster and there is no doubt that they are all here to scare. So who are these mystery women? Well, Kartik prefers to call the ghosts his saheliyaan (friends).

He also tagged co-stars Kiara Advani and Tabu in the post. Replying to the post, Mrunal Thakur said, “Hello Saheliyaan.”

Earlier, in the first look of sorts, Kartik Aaryan had shared a video of himself from the film. In the caption, he wrote, “Rooh Baba is coming. Bhool Bhulaiyaa 2. 20th May.”

This was followed by Kiara Advani’s first look post. In the caption she wrote, “Meet Reet. Don’t be fooled, she’s not so sweet. Bhool Bhulaiyaa 2 releasing in cinemas on 20th May, 2022,” the actress wrote.

The makers then released Tabu’s first look from the film. The caption read, “A devil or an angel? Or somewhere in between…Bhool Bhulaiyaa 2 releasing in cinemas on 20th May, 2022.” Kiara too shared Tabu’s motion poster from the film and wrote, “Don’t trust everyone. Even looks can be deceptive.” Kartik Aaryan’s caption on the post read, “Miliye Rooh Baba ki sabse Fav Bhabhi se.”