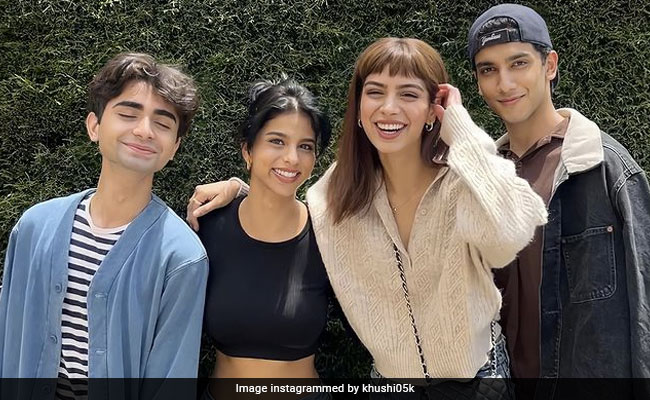 Khushi Kapoor with Suhana Khan and others. (courtesy: khushi05k)

New Delhi: It’s a wrap for The Archies team in Ooty, and Khushi Kapoor has shared a collage of her pictures featuring some behind-the-scenes moments from the sets. Helmed by Zoya Akhtar, The Archies is one of the highly-anticipated movies as it will mark the Bollywood debut of Amitabh Bachchan’s grandson Agastya Nanda, Shah Rukh Khan’s daughter Suhana Khan and late Sridevi’s daughter Khushi Kapoor. Now, as the movie has completed its Ooty schedule, Khushi shared a post on her Instagram stories along withThe Archies cartoon stickers.

In the collage image, we can spot Khushi Kapoor posing with her co-stars Suhana Khan, Agastya Nanda, Yuvraj Menda, Vedang Raina and others. Sharing the post, she captioned it as “Ooty wrap,” followed by a heart emoticon.

Zoya Akhtar also shared a post on her Instagram handle. She dropped a monochrome picture of “WRAP” spelt out with LED lights. Along with the image, she wrote, “It’s A Sign #schedulewrap #thankyouooty”. Soon after she shared the post, her industry friends flooded the comment section. Khushi Kapoor’s sister Janhvi Kapoor dropped heart emoticons, while Shweta Bachchan dropped a heart and sprinkled emoticons.

Ever since The Archies team started shooting for the film in Ooty, they kept their Instagram family updated by sharing some stunning pictures from the picturesque location. Check out some posts below:

Meanwhile, The Archies, based on the famous comic of the same name, also stars Dot, Mihir Ahuja, Yuvraj Menda and Vedang Raina. The film will release next year on Netflix.